Jimmy Buffett sings this line in “Trying to Reason with Hurricane Season,”:

“Strollin’ down the avenue that’s known as A1A.”

But for a bit, we will forgo the smell of salty air and the sound of waves gently rubbing the shores while beach chair lounging, margarita in hand.

References often point out Fernandina Beach as the beginning of A1A heading south; however, the northern terminus is west of I-95, the only section to do so. A stretch from Callahan to Yulee is 15 miles. You must endure another, sometimes painstaking, 12 miles before island time commences. On Amelia Island, A1A will make its first turn southward—but not before making a turn northward then eastward again. Once that southward turn is made, A1A will hug coastline for most the journey to Key West.

A1A begins at the major intersection of Callahan, with US 301 from the south meeting up and joining US 1 and US 23 northward. From here, a left turn will have you arrive in Georgia in just under 30 minutes; cross the intersection and head eastward onto Florida State Road 200, which becomes signed A1A.

Callahan will seem unappealing, but it is not completely uninteresting.

A small, rural town that invites a steady stream of traffic within the forementioned intersection, Callahan sits in the western part of Nassau County, the northernmost county of A1A. Known agriculturally for timber farming, Callahan is conservative, its residents generally known as church-going and hugely supportive of its West Nassau High School Warriors, especially during football season.

Callahan is not what many have in mind when thinking of A1A as Florida’s most scenic road, but it is functional. At this nondescript intersection, a CVS and a Walgreens caddy-corner each other; McDonalds and a Marathon Gas Station occupy the other pair. Fast-food establishments are aplenty nearby.

At the risk of gawking truck drivers and locals wondering why you would do this, park at Marathon Gas Station to get a photo op of the first A1A road sign. 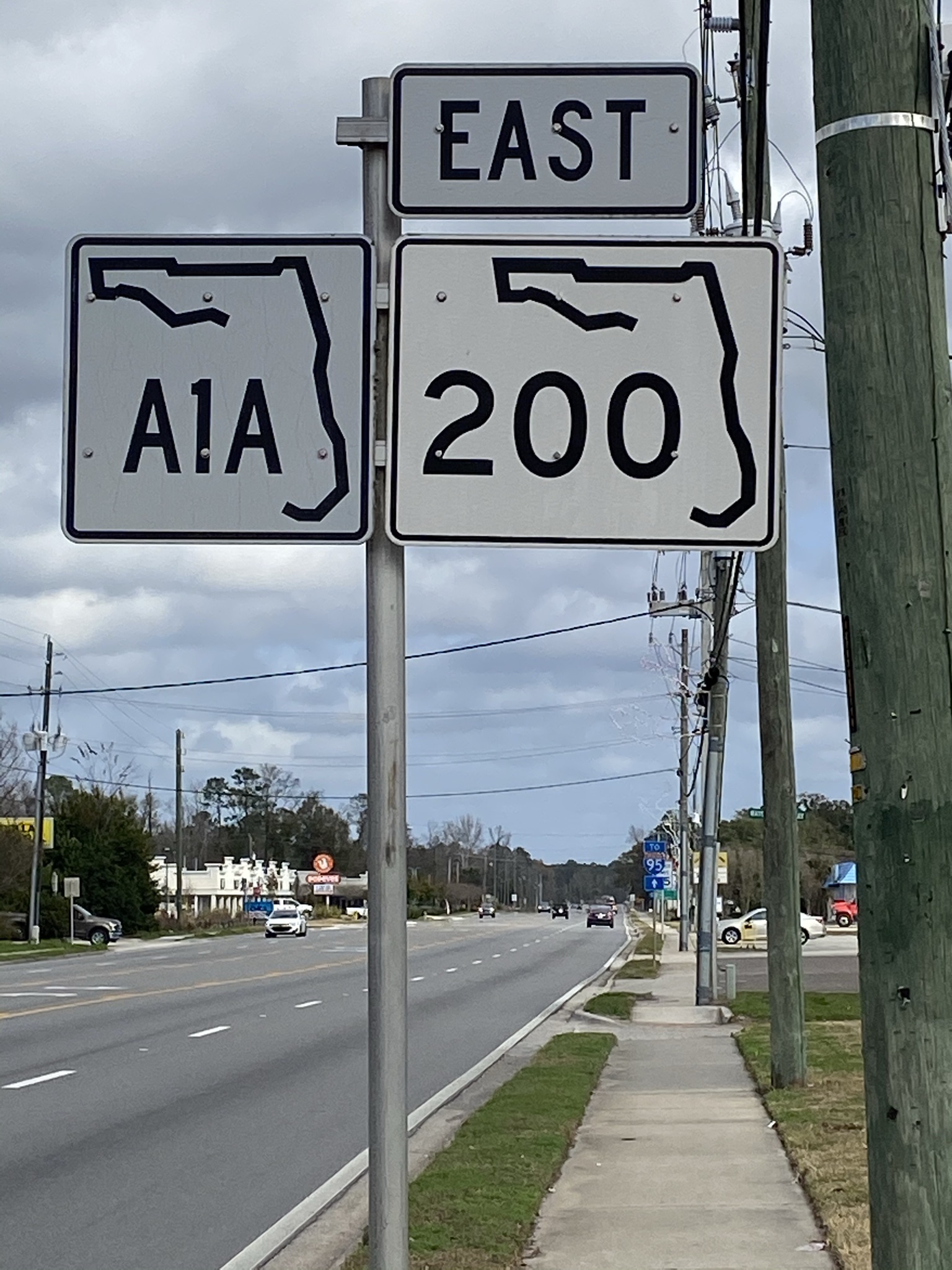 For a meal that is a northeast Florida original, travelers will find within this mass of Callahan drive-thru delicacies a quick-service restaurant—The Sheik. Originated in 1972 near downtown Jacksonville (just south of Callahan), The Sheik is emblematic of the influence of Northeast Florida’s middle eastern community by way of pita-stuffed camel riders (also known as desert riders) and cherry limeades. Along with The Sheik’s other locations, including Callahan’s, are several dozen restaurants in the Jacksonville area offering similar fare.  A New York Times article by John T. Edge, published on July 31, 2012, “A Taste of Jacksonville, Tucked into a Pita,” provides a glimpse on how these pita sandwiches are an integral part of the region’s culinary scene. Fittingly, for A1A travel, Edge quotes Melad Assi, a Jacksonville pita baker:

“You can take a piece of Arabic bread and fill it up and eat it on the road. You can ride with it in a car or on a camel.”

He said it; I am only repeating it. 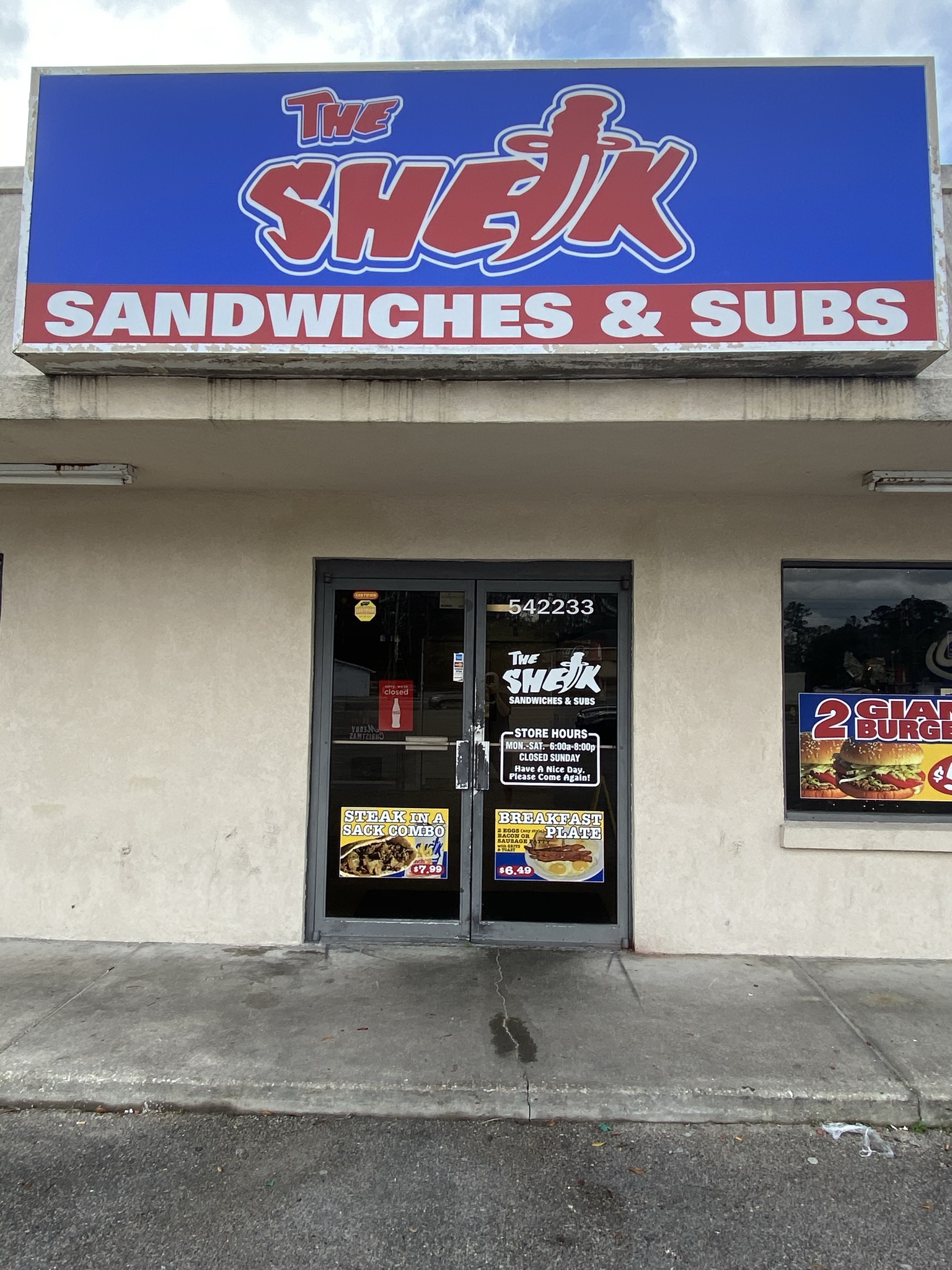 Another regional chain of restaurants, this for chicken wing afficionados, is Dick’s, located less than a mile from the A1A starting point. On Sundays, bring in your church bulletin for 10% off your bill. In the same shopping area parking lot is Callahan Barbeque, a.k.a The Chicken House. The food is really yummy, the service super friendly, and the prices very reasonable. Suggestion—get an order of fried okra for the road but wait until you get a few miles down the road before consuming these nuggets; if you begin eating immediately, you will want to turn back and get some more. We have a long ride ahead of us.

Callahan is connected to two interesting bits of trivia. One involves a skirmish in the Revolutionary War known as The Battle of Alligator Creek Bridge. In summary, soldiers representing the Continental Army, without success, attacked the British on June 30, 1778, thus ending the notion of the colonists taking control of East Florida. The British will turn over Florida back to the Spanish as part of the Peace of Paris agreement in 1783; the Spanish will practically give Florida to the United States in 1819, because—who wants to buy swampland, right?

A roadside historical marker, erected by the Florida Society of the Sons of the American Revolution in 1938, commemorates the battle. It is located off US 1, just a bit north of the intersection.

The British built “The Kings Road”, offering a route from the St. Marys River, located at the very northeast Florida-Georgia border, to St. Augustine, then the British capital for East Florida. While not the exact route that is now US 1 in Florida, it parallels closely. US 1, an over 2,000-mile stretch beginning from the north in Fort Kent, Maine, will parallel A1A for most of the ride south, sharing signage at times, especially throughout the Florida Keys. US 1 will be mentioned often.

It would be a “failure to communicate” with you the second connection, which focuses on the 1967 movie Cool Hand Luke. Though fictional, the movie is influenced by the experiences at a Tavares, Florida prison camp by former inmate Donn Pearce, who wrote the novel and co-wrote the Academy-award nominated, adapted screenplay. The Tavares camp provided the visual setting for much of the movie filmed almost entirely in California.

A brief segment of the movie, filmed in Callahan, shows the main character, Lucas Jackson, while attempting a prison escape, being chased by bloodhounds that were borrowed from the Florida Department of Corrections. Paul Newman played the role of Lucas, but a stunt double was used in the scene filmed near the now nonexistent Callahan Road Prison.

Another northeast Florida connection to the movie goes from fiction to fact. In a feature of the Florida Times-Union known as “Call Box”, veteran writer Sandy Strickland answered a question from a reader on February 9, 2018:

“Dear Call Box: The other day my wife and I were watching “Cool Hand Luke,” and we were wondering where it was filmed. She Googled it and found out that Jacksonville, among other places, was a shooting location. I wonder if you have any more information as to where those scenes might have been shot.”

“The movie used the designation of Road Prison 36 for the fictitious chain gang camp…. The real Road Camp 36 was in southern Duval County and known as Sunbeam Prison Camp… The complex of five wooden buildings and a sweatbox were set in the pines near the unincorporated village of Sunbeam, near where Sunbeam Road meets Philips Highway today.”

Philips Highway is the name of US 1 as it runs through Jacksonville’s southside.

Only four miles into the A1A journey is the entrance to Four Creeks State Forest, named for Alligator Creek and three others, Thomas, Boggy, and Plummer, which join to form the Nassau River headwaters. Recreational activities include hunting, fishing (especially for bass), hiking, canoeing/kayaking, bicycling, and horseback riding. Camping is offered at Saul’s Landing (temporarily closed). The combination of flatwood, tidal marsh, and swampland, as well as potential for wildlife sightings, provides a true, off-the-A1A road, Florida adventure. Check out the YouTube videos that provide a virtual ride into this forest. As kayaking is mentioned, A1A offers many opportunities for awesome paddling experiences. Click here for a nice write-up on Four Creeks.

So, if you consider taking that complete ride on A1A, do not forget, it all begins (or ends) in Callahan.