The Complete A1A blog entry #7 brought us into Duval County from Amelia Island, where travel stays within the Timucuan Ecological and Historical Preserve until arriving at the St. Johns River Ferry on Fort George Island.

Here, the ONLY ferry service along A1A transports vehicles, bicyclists, and pedestrians for nearly a mile across the St. Johns River. For those traveling south on A1A…

For this Complete A1A journey, we travel through Mayport, arriving at SR 116/Wonderwood Drive, where we venture off A1A. Only three miles are covered on A1A, but leads us to two Duval County sites worthy of exploration: Kathryn Abbey Hanna Park and more of the Timucuan Ecological and Historical Preserve. Beyond the preserve, we will take a look at three other sites.

To begin this part of the journey—before crossing the river with your transportation, first enjoy the ferry ride as a pedestrian. It costs only $1 each way (the cost for a car is $7 on weekdays and $8 on weekends); this allows a chance to view the Mayport docks, the birds—especially the brown pelicans at the Mayport ferry slip, and possibly some dolphins on the river. It will also encourage you to explore Mayport by foot, thus embracing the charm of this quaint village. 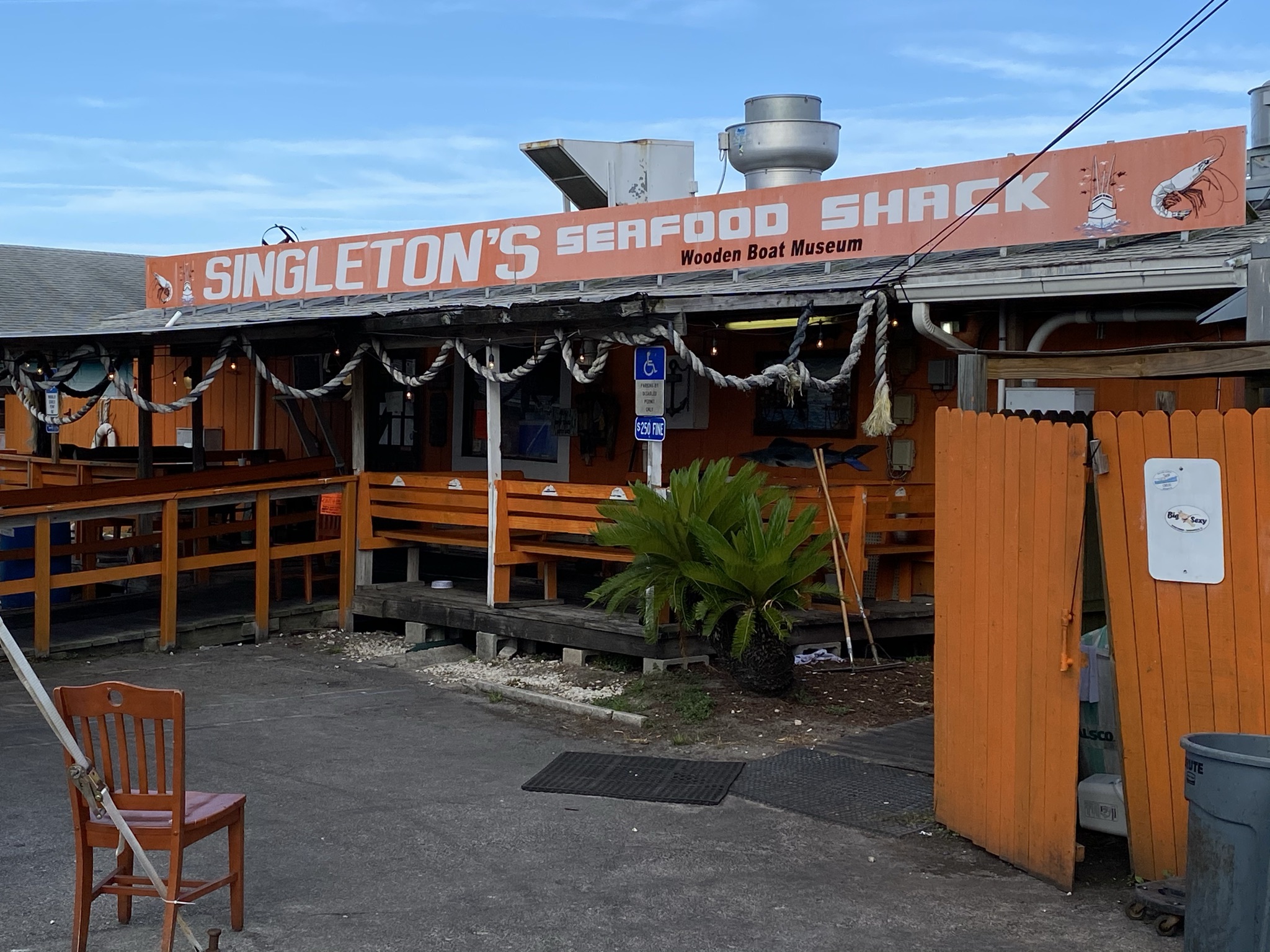 Singleton’s, one of four restaurants in Duval County featured on Food Network’s “Diners, Drive-Ins, and Dives,” truly has that rustic, Old Florida atmosphere.

Singleton’s history spans over 75 years, and throughout has served fresh seafood, including its most popular dish, lightly-breaded fried Mayport shrimp with the traditional basket fixins.

Safe Harbor, a seafood market and restaurant in Mayport, is also located along A1A in Crescent Beach; Slider’s Seafood Grille and Oyster Bar, part of Safe Harbor’s portfolio, is located at the Beaches Town Center, close to where Atlantic Beach and Neptune Beach meet.

A very short drive (or walk) from the ferry slip brings you to the St. Johns River Lighthouse, the second to be seen along A1A south.

Built in 1858, the lighthouse was deactivated in 1929. It is 80 feet tall and has a 90-step climb to the top. Unfortunately, the lighthouse, located within the grounds of Naval Station Mayport, cannot be accessed by visitors.

Another reason for the lack of accessibility? The landfill raised around the base of the lighthouse has buried the original door entry; one has to enter through a window opening to get inside.

Still, an excellent view is provided from the barbed-wire border fence.

For this three-mile stretch, A1A re-enters the Timucuan Preserve, traversing along river and salt marsh, before arriving at SR 116/Wonderwood Drive.

Heading south on A1A, a left turn on Wonderwood Drive brings you to a City of Jacksonville gem, Kathryn Abbey Hanna Park. 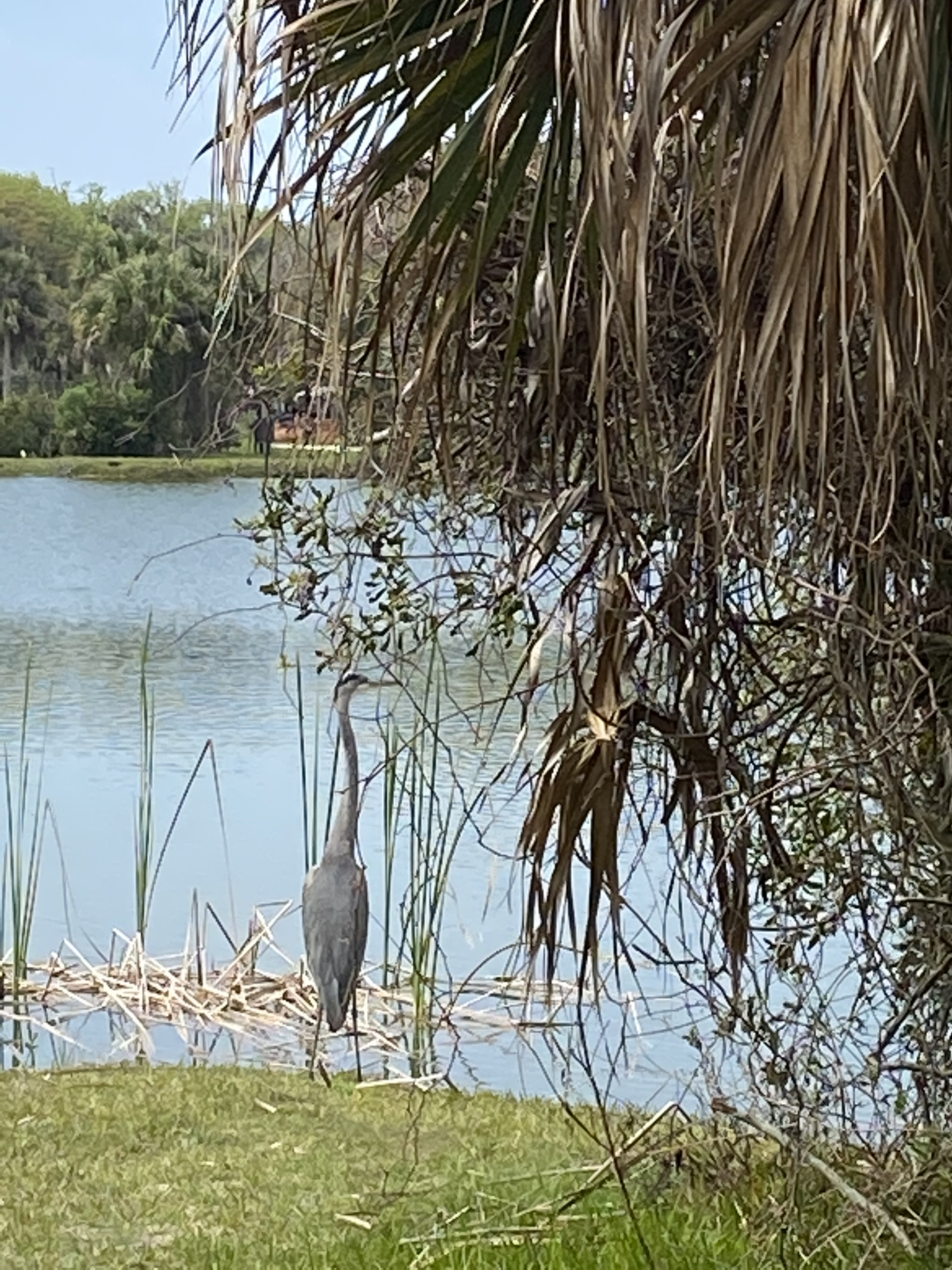 Hanna Park consists of one and a half miles of beachfront, a freshwater lake, trails for hiking and biking, and sites for tents and RV’s along with cabins.

One of the popular spots within Hanna Park is The Poles, the beachfront section that borders the naval station; it is considered one of the best surfing spots along the Jacksonville beaches. In the distance, one can see the St. Johns Lighthouse, the second light at Naval Station Mayport. Built in 1954, the art-deco, square-shape light is 66-feet tall. From the poles, a camera with excellent zoom range can get a good photo.

My iPhone barely reaches, but at least I attempted.

Hanna Park is part of the Great Florida Birding and Wildlife Trail; a visit here most likely will provide a range of birdlife and, of course,…

Near the entrance of Hanna Park, on Mayport Road, is Mayport Tavern, where they claim they are “serving the coldest beer in town.”

Here is a local spot with a menu list of cheap beer, wine, and food (kids menu items included). They also host a variety of events, from trivia nights, pool tournaments, and karaoke. To get a feel for this pub-style joint, check out their Facebook page.

A right turn on Wonderwood Drive takes you across the Intracoastal Waterway toward Downtown Jacksonville. After crossing the Girvin Road intersection, Wonderwood Drive becomes Mount Pleasant Road, which takes you back through the Timucuan Preserve.

To the right, Mount Pleasant Road borders the Theodore Roosevelt Area of the preserve, which includes the Willie Browne Trailhead, named after the man who donated the land with the stipulation that it never be developed but instead maintain its wilderness quality.

An excellent read on him comes from columnist Mark Woods of the Florida Times-Union, “We should have a Willie Browne Day” (December 13, 2019).

In his article, Woods opens with this:

“Willie Browne gave Jacksonville one of its greatest gifts ever. When he died in December 1970, his land became our land.” 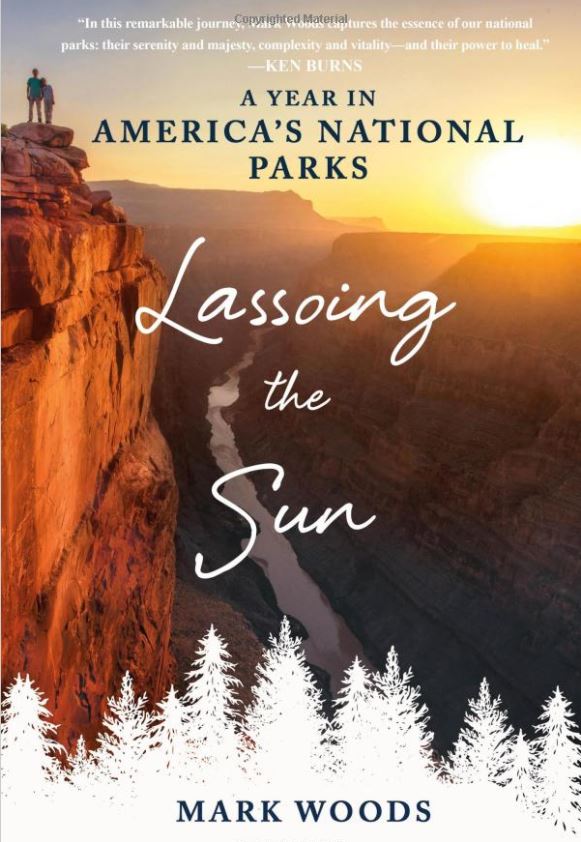 A digressional plug for Woods—his book, Lassoing the Sun: A Year in America’s National Parks, is a must-read for traveling souls. Just sayin.

The Willie Browne Trail, which cuts through hardwood forest, wetlands. and salt marsh, takes you to Browne’s cabin site and family gravesite. It connects with the Spanish Pond Trail and leads to an bird-viewing observation deck overlooking Round Marsh. 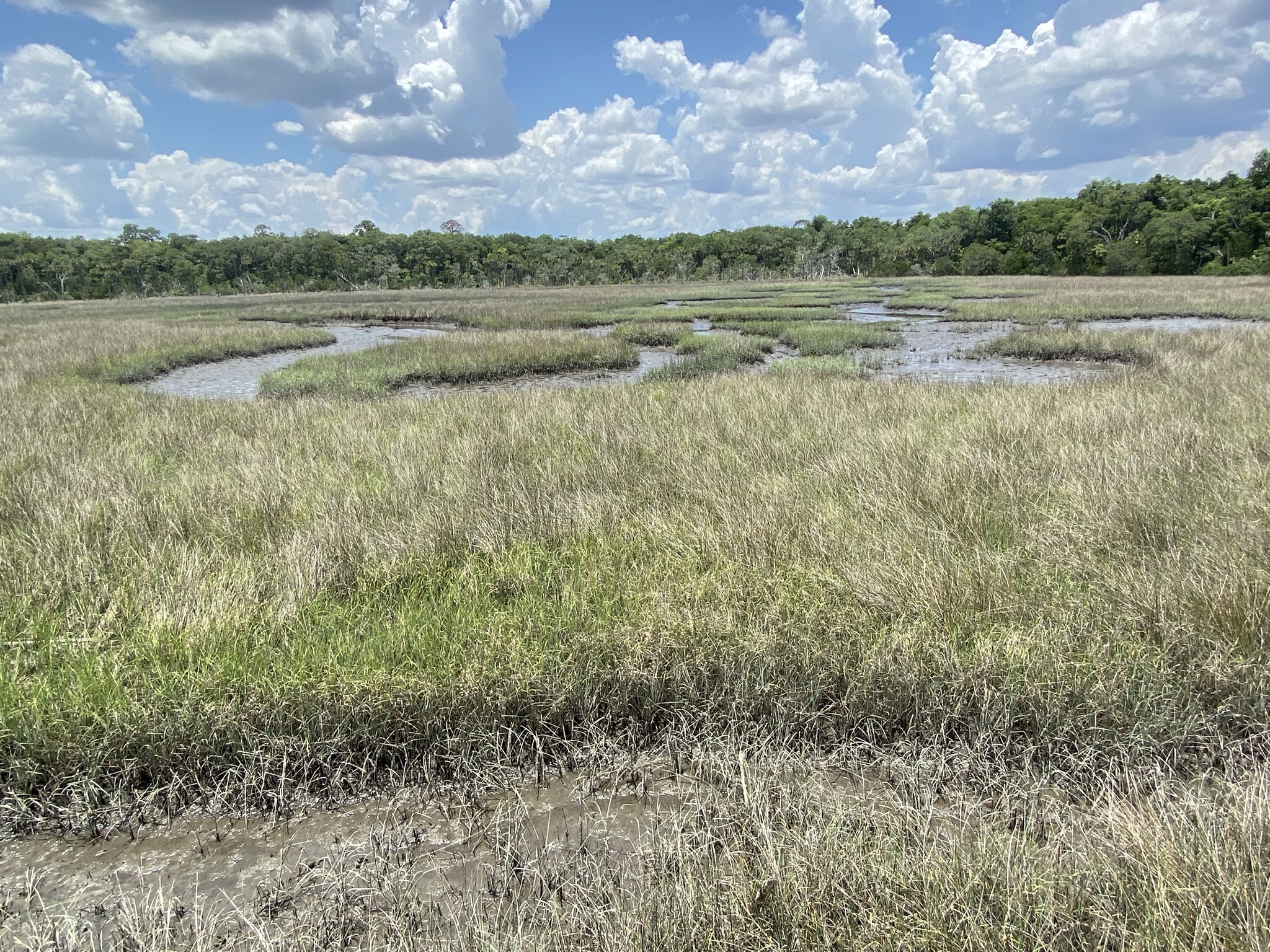 A March 5, 2021, write-up on Round Marsh by Tim Gilmore, who authors stories about Southern haunts, appears on the Jax Psycho Geo website.

More insight on Willie Browne, along with mysteries surrounding this location, are revealed.

The Spanish Pond Trailhead is just off Fort Caroline Road, a right turn off Mount Pleasant Road. This is the entrance to Fort Caroline National Memorial. 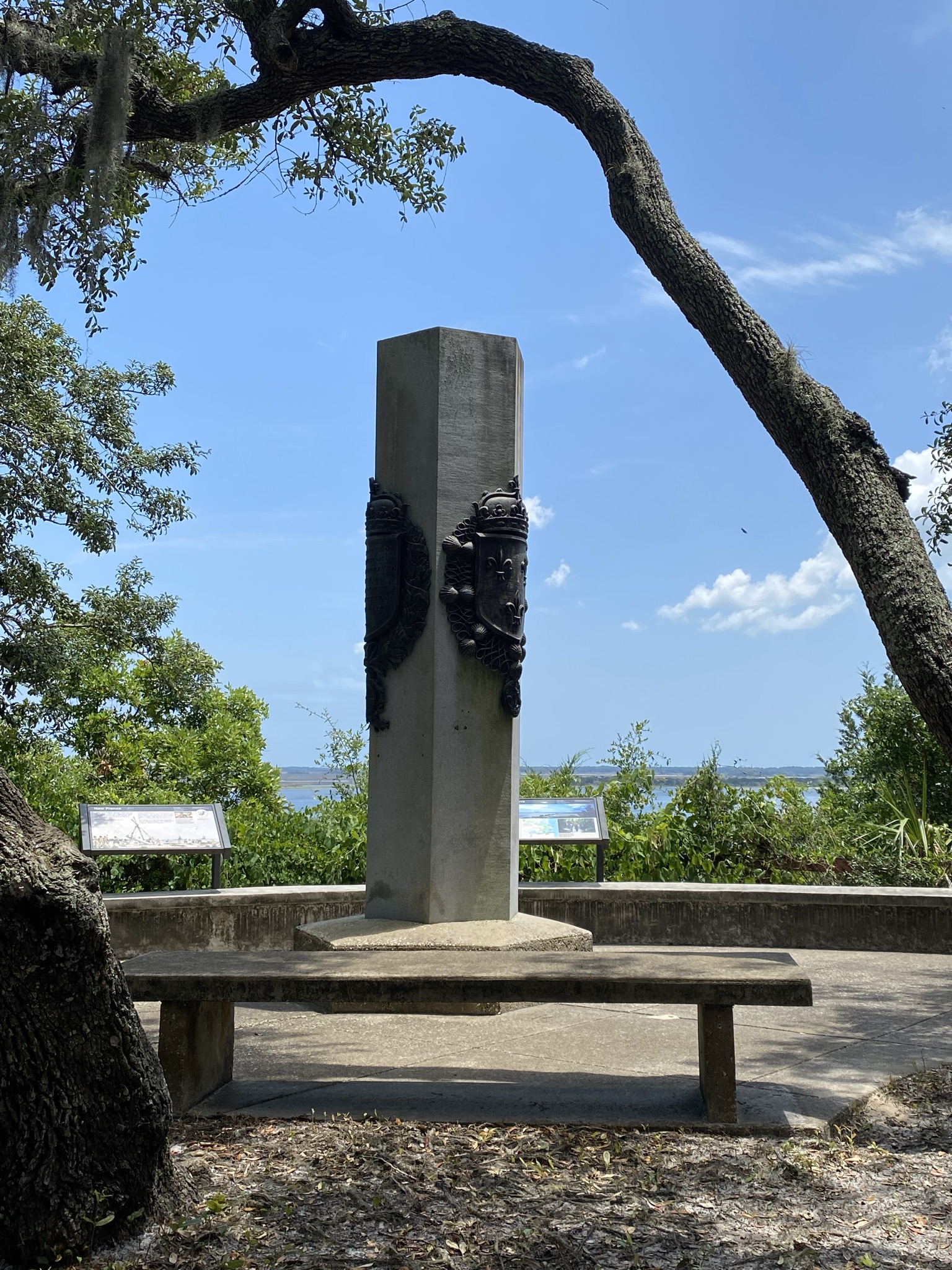 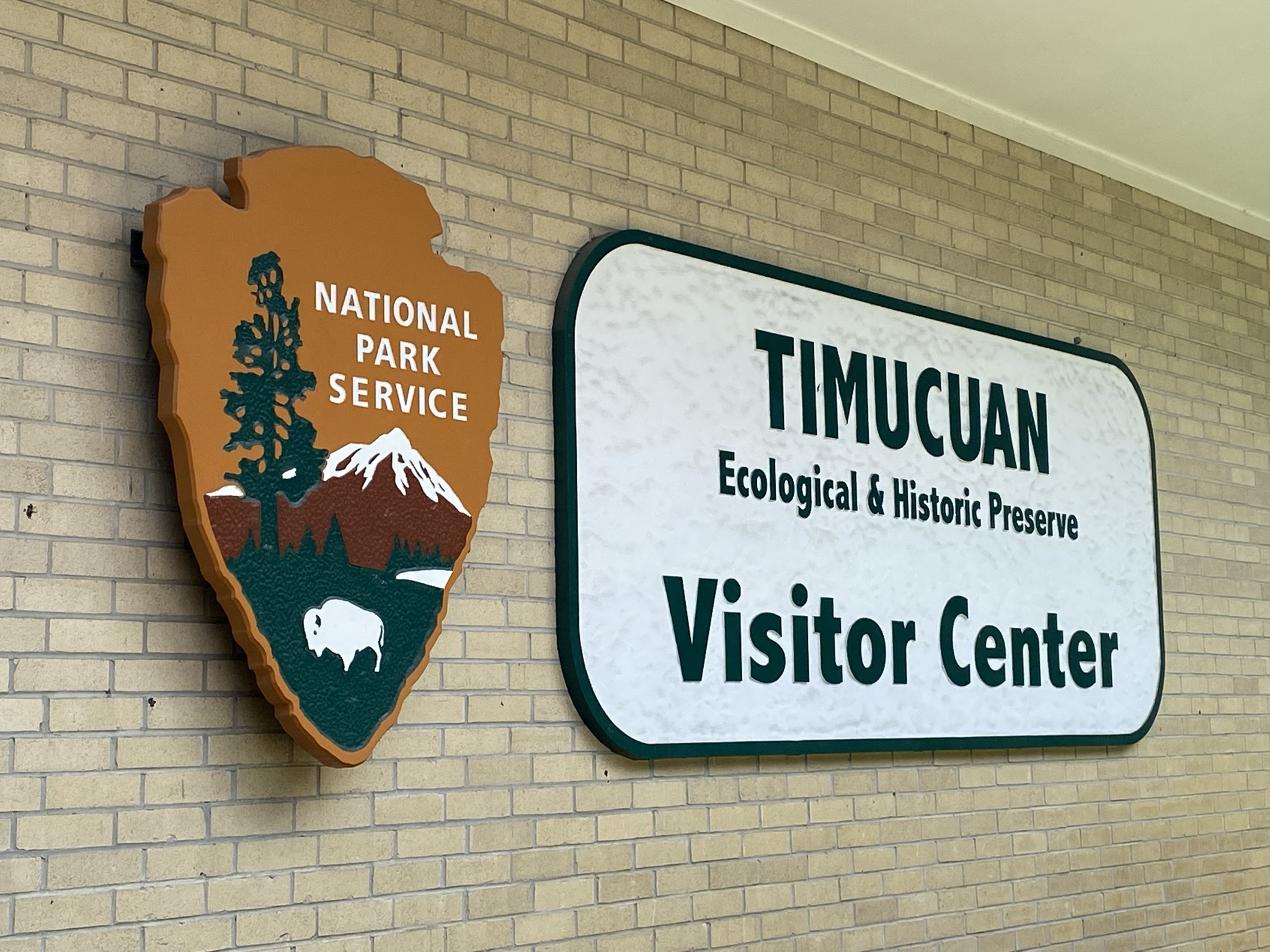 Along with the trail, there is the replica of the fort built by the French to defend its settlement; the nearby Ribault Column, recognizing the landing of the French on May 1, 1562; and the Timucuan Preserve’s Visitor Center.

Like the Willie Browne Trail, the Spanish Pond Trail (two miles round trip) is full of beauty and tranquility, although a posted sign at the trailhead might strike a nerve. Among the “venomous” snakes to watch for are the eastern diamondback rattlesnake and the pygmy rattlesnake. On my hike, my closest reptile encounters were lots of lizards scattering through the leaves along the trail. I did sight some poison sumac, but the trail is wide enough to avoid contact.

While walking the trail provides a chance to connect with nature within city limits, the history of Spanish Pond is not of peaceful bliss but of bloodshed, mainly the blood of French defenders that suffered greatly during an attack on Fort Caroline by the Spanish in September of 1565. Almost overnight, the French were wiped out, thus leading the way for Spain to gain control of Florida for nearly 200 years.

This, along with the exploration from the previous blog, completes the visit to Timucuan Preserve, but there is still more to be offered for nature enthusiasts. And here is a reminder—Jacksonville has the largest urban park system in the country.

The Jacksonville area is also known for its golf courses.

With Timucuan Preserve to the right of Mount Pleasant Road, to the left is Hidden Hills Golf Club, whose Arnold Palmer signature design golf course, once private, is now open to the public.

What distinguishes Hidden Hills from other golf courses in Florida is the terrain, which as the name of the club suggests, has hills providing a different challenge for golfers in the area. Hidden Hills, from 1970-72, hosted the PGA’s Greater Jacksonville Open (precursor to the Tournament Player’s Championship at Sawgrass), with its three champions being Gary Player, Tony Jacklin, and Don January.

Continue onto Fort Caroline Road until it joins onto SR 116/McCormick Road, which then becomes Merrill Road. To the left, you will find more hiking at the Jacksonville Arboretum and Botanical Gardens, with its seven trails covering “13 distinct ecosystems.”

The land, once used for strip mining and later as a dump site, has been reclaimed by nature, and volunteer efforts have contributed to the arboretum maintenance, which includes making the trails ADA-accessible.

The arboretum highlights what is considered the nation’s LARGEST loblolly bay tree.

The final stop on this Complete A1A blog is Tree Hill Nature Center, which if traveling with children is a must stop in Jacksonville. 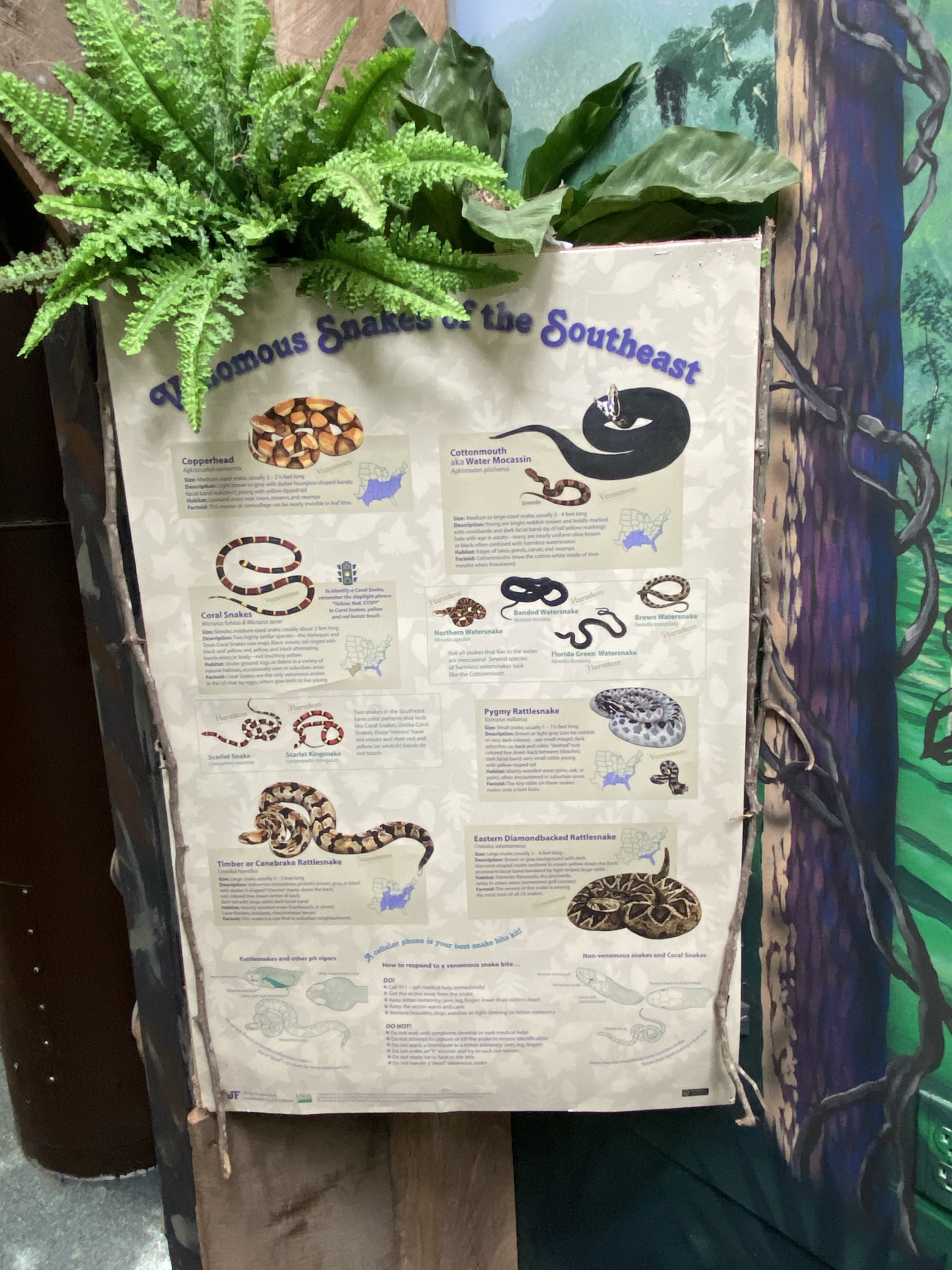 It is probably Jacksonville’s most popular student field trip spot; among its summer offerings is a conservation camp hosted by The Rattlesnake Conservatory. Tree Hill, with its emphasis on K-12 education, is simply an awesome place to visit for all ages. And, of course, hiking trails, well-maintained, make up much of the center. Various animal encounters and displays provide an excellent overview of Florida’s wildlife.

Final note: The Timucuan Preserve and Tree Hill Nature Center are two of seven sites participating in the Visit Jacksonville and the Beaches Museum Passport. Travelers visiting four of the seven sites may mail in the passport or submit it to one of the two visitor centers for a “special prize.” A passport can also be picked up at the Timucuan Preserve’s visitor center at Fort Caroline National Memorial.

Next: A1A from Wonderwood Drive to Atlantic Boulevard!